Matthew Silk
The majority of my research uses the opensource R software environment. R code developed by me or in collaboration with others for various research projects can be found on my GitHub (mainly more recent projects) or associated with relevant papers.

CMRnet
I have developed an R package to construct, plot and analyse social and movement networks from capture-mar-recapture data. 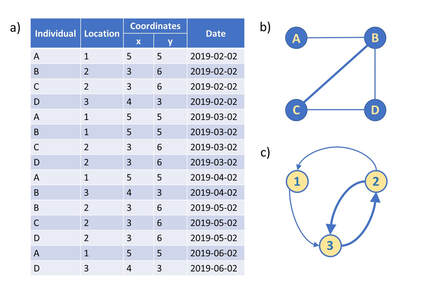 The package is designed to work with any spatially and temporally referenced capture data. Individuals that are captured at the same (or nearby) location within a set time interval and considered are linked by edges in the social networks generated, while an individual subsequently being captured in a different location constitutes a directed edge in the movement network.
There is also functionality to plot and conduct permutations of the networks generated included in the current set of functions. The outputs of the network generation functions can additionally be converted into igraph objects for onward analysis.

More details on how to use the package as well as some examples demonstrating its use can be found here.

The R code itself can be found here.

genNetDem
My second R package is a tool to simulate integrated social network and capture-recapture datasets. It is designed to be a general tool for methodological work as well as to help with study design and power analyses for animal social network research.

The functions in the package are modular enabling them to be easily used independently of one of each other. It is possible to generate social networks and sets of grouping events based on these networks. Social interactions can then influence survival probabilities to generate demographic datasets. Finally, it is possible to test various sampling schemes to generate co-capture datasets (capture-recapture data that also explicitly includes information about social associations) from these known demographic datasets. 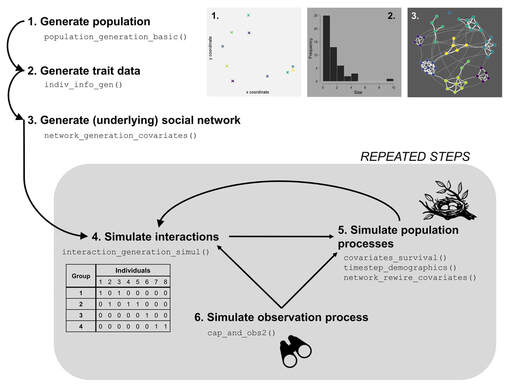 The package can be downloaded here. You can also read more about it in this preprint, where we also demonstrate how to use it with a couple of case studies testing how easy it is to estimate social network effects on survival probability in wild populations.